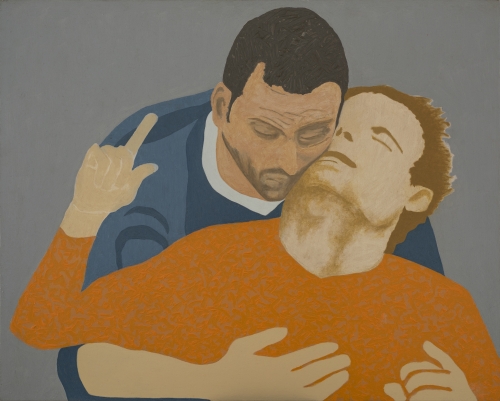 ‘Embrace’ is a deeply moving, even holy work–and I use the latter ad- jective advisedly. In the first instant of viewing, we sense that we stand in the presence of a drama larger than ourselves: a drama at once unfolding in the moment and perennial in the manner in which it is likely to repeat itself in a universal structure of events. What do we feel, when we look at these two male figures, both strong: one, in orange, apparently falling or struckdown, gesturing for attention as he communicates something of urgency to the other, in blue, who holds him tenderly, offering comfort or consolation, bending to hear him so that their cheeks touch? There is a tragic heroism to these figures, veined with an unabashedly masculine solidarity that couldbe read, perhaps somewhat reductively, as homoerotic kinship.

(Excerpted from the essay written by Ranjit Hoskote)