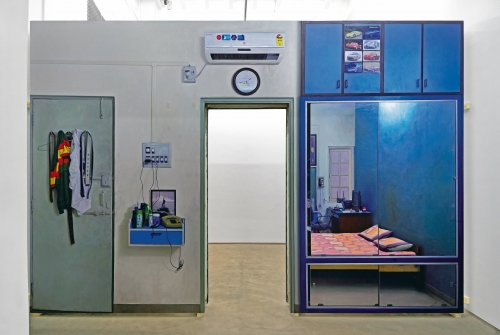 Abir Karmakar's contribution to the Kochi-Muziris Biennale in 2016 spread across the Kashi Art Gallery, a repurposed old Portuguese house not interesting enough architecturally to qualify for the 'heritage' label. Karmakar covered the bare walls with realistically painted, fit-to-fill canvases depicting a home he had seen during a family visit to Kutch. In conceiving and executing the sequence as he did, the artist elegantly overcame the hurdles that painting often faces within blockbuster shows. Attention-grabbing room-sized sculptures and location-specific installations are commonly found in biennales, but house-sized, sitespecific paintings are vanishingly rare.

While Home, as the installation of paintings was titled, became one of the talking points of the Sudarshan Shetty curated edition of the Biennale, it seemed like its journey was bound to end there. After all, the piece was predicated on inducing a near-illusion of walking around a fully-furnished home, one that could in many ways be called typical. The illusion was made possible by the dimensions of all the paintings being precisely calibrated to the walls and corridor of the Kashi Art Gallery space. The shape of the canvases accommodated doors and low ceilings, for instance, and would lose some of their impact if those physical coefficients were absent.

It was surprising, therefore, to witness how successfully Home transitioned to Galerie Mirchandani + Steinruecke as a solo show. Bolstered by additional canvases, and renamed Displacement, the exhibition from the 15th of November to the 28th of February required unusual and bold solutions to aid the shift, and these were supplied by the show's curator Birgid Uccia in consultation with the artist and gallery. The Mirchandani + Steinruecke space consists of four exhibition rooms and each became the site of a different sort of creative intervention. In the first, four canvases were held upright by wooden supports in the manner of stage backdrops, forming a square within the room's larger square. One got to the viewing point after making two entrances: the first into the room itself, and the second through the door cut into a painting.

The next room contained two canvases made specially for the Bombay show. They stood upright, back to back, dividing the room lengthwise. A door was cut into them, and their support had the thickness of a wall, giving the sense of passing through a house. However, Karmakar did not attempt to replicate the Kochi effect, leaving a substantial gap between the top of the paintings and the gallery's ceiling. The location and context was anyway too unlike the type of home he was replicating for a suspension of disbelief to be credible. Nevertheless, the view through the physical opening, seen simultaneously with painted doors opening onto painted rooms, created a stimulating interplay between three and two dimensions.

The third section held the largest single piece in the show, which had taken up an entire passageway in the Kashi Art Gallery. It was so long that it could not be accommodated flat against the wall. Instead, in a radical solution that could have gone horribly wrong, the painting was stretched onto a convex, curved frame to make it fit the room's dimensions.

The fourth room in Galerie Mirchandani + Steinruecke presents a challenge for any artist or curator. It is fairly narrow, and contains one door leading to a pantry, another to a storage space, and has a pillar planked right at its centre. Karmakar tackled these distractions by painting the pantry door to match his canvas, and also painting the bottom of the pillar with the same pattern used in a pillar within the canvas. Through this device, as with the 'wall' in the second room, Displacement acquired a hint of the site-specificity and illusionism that Home had possessed in Kochi, and contrasted effectively with the foregrounded artifice of the rest of the display.

The subject of the paintings, the Kutch home, came through differently in the gallery space than it had in the biennale. Kochi had provided a sympathetic experience of a certain kind of middle class Indian taste and style of living, whereas the distancing effect of the gallery and installation made for a more analytical reading. Details of the paintings now came to the fore, not least because of the optimum lighting, where within the often stifling Kashi Art Gallery the gestalt had held more value. Among such details were the artist's distortions and departures from realistic rendering, such as a television set and a cupboard far wider on canvas than they would ever be in actuality.

Karmakar first achieved recognition through paintings focused on human figures but has in recent years preferred interiors emptied of people which hint at human presence through traces of their activities. Often, he has painted the same rooms from varying perspectives, spaces which create the impression that one can solve them like a jigsaw puzzle by arranging them coherently in one's mind, but which remain ambivalent and enigmatic at the end of such an exercise. In Home and Displacement, he replaces momentary traces of human intervention with an accretion of possessions that appears to have taken place over years and across generations, with some features being retained virtually without alteration alongside new inclusions indicative of changed priorities. A garlanded photograph of a woman in a sari and man wearing a Gandhi cap shares a wall with a naked tubelight and an exposed fuse-box, but the cheap white paint of that wall is interrupted by a patch of expensive tiling above a blue washbasin of vitreous China. A calendar of divinities hangs below a slightly off-kilter frame containing an embossed golden RadhaKrishna. Moulded luggage suitcases, presumably stuffed with belongings that are no longer loved or required but are nevertheless considered too precious to be thrown away, are crammed on a narrow ledge between a row of cupboards and the ceiling. Each of these carefully detailed features, a refrigerator with a floral pattern, bric-a-brac in display cabinets, a poster of supercars beside a split air-conditioner, builds a specific record of a single place and time which is also a chronicle of a family's journey and, through the typicality of that journey, becomes a commentary on larger historical processes. /