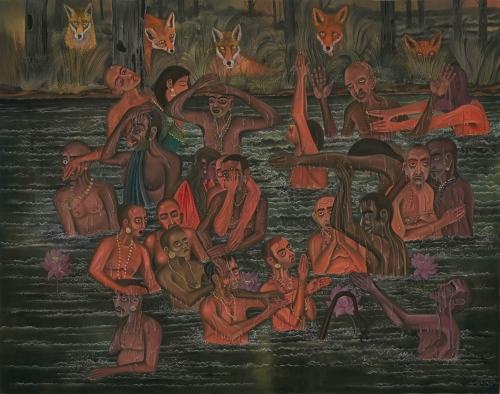 The mostly pastel-on-paper paintings in Abul Hisham's "Recitation" are full of narratives presented in medias res. On a small, scrubby island in Recitation 3 (all works cited, 2018), a snake coils around a tombstone. Its head disappears into the accordion-pleated murkiness that stands in for both sea and sky; its tail tapers to an elegant figure eight. Recitation 5-A hundred lights depicts the same grave, but water levels have risen, and we seemed to be observing it from the mouth of a cave, behind a screen of incense sticks. The works invoke a pair of eschatological Islamic concepts, the barzakh, a liminal, watery spree between death and the afterlife, and the "torment ill the grave," wherein unbelievers are tortured by serpents. Koranic recitation becomes a safeguard against this latter fate.

Some scholars believe that only animals can hear the torment in the grave. Perhaps thats why wolves gather on the grassy banks of a river to watch the bathers of Hidden Obstacles (19th Trap). Immersed waistdeep in lotusstudded water, the mostly male figures sport prayer beads and assorted jewelry. However conspicuous the piety on display, in is not ascetic. One wolf licks its chops. The bathers' skin has the luminosity of banked embers, a powdery kind of warmth shared by the other pastels in the show (the smaller acrylics on canvas felt flat in comparison). In their poses and funny little tics of individuality, the figures suggest both the magnificent Buddhist Ajanta Cave murals and a keyboard of reaction GIFS. But the water seems to freeze as it runs in rivulets down their arms and torsos; only some of their faces register the cold.

The barzakh is sometimes described as a place where fresh water meets the ocean, two realms of differing densities from which pearls (and corals) emerge. Notably, it's never brackish: The barzakh forms an insurmountable barrier between the world of man and the sea of eternity. But here, the veil seemed to have thinned like the ozone layer, with spectral figures dropping in on many of the works in the show. The subject of Complaining Man II sits on a mat among assorted objects holding a pearl between his thumb and forefinger in some- thing resembling a gyan (knowledge) mudra, or hand gesture. Beside him, a resplendent peacock fans its tail against translucent bars that stand in for a barzakh.

Behind the barrier, all manner of otherworldly humans and equines are intimated through dotted outlines, a style of markmaking also used to form the Malayalam script in the foreground, which spells out the words for today, tomorrow, and yesterday. Dense swirls of Arabic text-accretions of the words for ego and desire, motifs repeated throughout the show-add further texture. Barriers, serpents, pearls, and Arabiclanguage patterning recur elsewhere, most notably in the latticed portcullis dominating the foreground of Bad Harvest (the horse gobbles plantains, a couple attack some banana palms) and the supremely, deliciously weird multispecies hallucination of Heat Rash (Noise level should not exceed 105 dB). In the latter, a chimeric orangutan throws its head back in anguish or ecstasy as its digits hold a pearl in the same mudra.
The mix of Malayalam and Arabic scripts invited another narrative, that of the migrant Keralite workers-"temporary people," as Deepak Unnikrishnan called them in his 2017 novel of that name-who toil in the sunbaked cities of the Arabian Gulf, sending home not only money but Gulf culture and religious mores, too. Unnikrishnan's surrealistic reconstruction of this phenomenon is a particularly seduc- liucdement in his fiction, and Hisham's paintings offer a thrilling analogue. Ocean crossings are now conducted by air, but the  of uneasy limbo remains.